“Honourary Life President is awarded to someone who shows commendable service to the Royal St. John’s Regatta. Mr. Perlin has been an exemplary role model for the Royal St. John’s Regatta Committee and instrumental in the success and longevity of our beloved event. It’s bittersweet to have been a part of the selection process as we’re celebrating the newest Honourary Life President, while paying tribute to the previous.”
– Noelle Thomas-Kennell, President

This occasion comes after the passing of Mr. Jack Reardigan in 2019 and Mr. Gerry Angel in 1998, both of whom who were synonymous with the Royal St. John’s Regatta.

“May I just say that I am deeply honored to have been elected as the Honourary Life President of the Royal St. John’s Regatta Committee. I joined the Committee in the mid 1950’s and served in most of its offices during my nearly 70 years of association with it. I very much appreciate this unique distinction that the Royal St. John’s Regatta Committee has bestowed on me.”
– John C. Perlin CM, CVO, ONL, LLD

Perlin has served in a variety of roles including but not limited to President, Vice President, Secretary, and Treasurer. He was instrumental in securing the “Royal” designation by Her Majesty, The Queen in 1993. In recognition of his significant contributions to the Royal St. John’s Regatta, Perlin was inducted into the Royal St. John’s Regatta Committee Hall of Fame in 1994.

Philanthropist, organizer, conservationist, and volunteer are just some of the words that describe John Crosbie Perlin. He has lent himself to many causes, passions, and activities that will be felt for generations. The broad wake trailing behind him will continue to wash over this province and build momentum as he carries on and persists in finding more of himself to give to Newfoundland and Labrador.

It would be a feat to name all the organizations that he has helped found, chair, govern and volunteer with over the years. In a simpler summation of his character, Mr. Perlin is a humanitarian, an impassioned caretaker of the environment, a promoter of culture, and a human spotlight that has helped illuminate the achievements of many in this province.

Mr. Perlin’s work with the Quidi Vidi Rennies River Development Foundation has transformed itself into much of the Grand Concourse trail system that winds through St. John’s. In part, his efforts led to the prestigious designation of Royal being bestowed upon the Royal St. John’s Regatta, as well as helping acquire a Coat of Arms for the committee. He has been appointed by Her Majesty the Queen as a Lieutenant of the Royal Victorian Order, later promoted to Commander. He is a Member of the Order of Canada, has received the Queen’s Silver and Golden Jubilee Medals, the Canada 125 Medal and many other distinguished honours. He is a Knight Commander in The Military and Hospitaller Order of St. Lazarus of Jerusalem in Canada, was National President of the Duke of Edinburgh Award, the St. John’s Citizen of the Year in 1988, and serves as the Chairman of the NL Salvation Army Advisory Board.

There are a multitude of other activities, organizations and accomplishments that Mr. Perlin has been involved with not mentioned here. It is clear that he has given himself freely and most wholeheartedly to communities, people, the province and country. His involvement is a precursor for success, and a sign that a greater good will be the product of his endeavours. 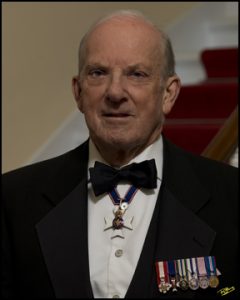 For more information or to request an interview, please contact:

From September 19 - 25, when you buy a Smile Cookie, 100% of the proceeds go to support a local charity or community group. It’s deliciously easy to make a difference!

The Royal St. John’s Regatta Committee offers its condolences to The Royal Family on the passing of Her Majesty Queen Elizabeth II.